Skip to content
Barbari, crisp on the outside, light and airy on the inside, is a traditional Persian flatbread popular for breakfast in Iran.
Jump to Recipe Print Recipe

Barbari, crisp on the outside, light and airy on the inside is a favourite, traditional Persian flatbread. It is a popular bread for breakfast in Iran, and is served with any number of accompaniments like cheese, fruit, cream and nuts.

Bread is an important part of Persian cuisine, as it is in many other foods of the world. The earliest archaeological evidence of bread being baked and consumed, goes as far back as 9000 years ago, found in the northern parts of what is now Iran.

Besides Barbari, other types of bread found all over Iran include Sangak, Taftoon and Lavash. Then you also have the regional types, like Lako, popular along the Caspian Coast, and Shelkine, a bread favoured by the Kurds.

There are a few theories explaining the origin of Barbari. One of them is that it’s named after the Barbars, or barbarians/foreigners. The Barbars refers to an indigenous ethnic group from the north eastern part of Iran, so bread baked by the Barbars is known as Barbari, by the Barbars or of the Barbars. Or Naan-e-Barbari, as bread in Farsi (the Persian language) is naan, or noon.

Another theory maintains that Barbari is of Turkic origin. Of course, Turkic covers a wide range of peoples covering north, east west and central Asia, not to mention parts of Europe. They are said to be related to the Mongolians. The Turkic people moved a wide distance and at some point, settled in and around Iran and other parts of West and Central Asia.

Suffice it to say, there are many breads across the region that are similar in nature to Barbari, with various differences and similarities in the recipes, preparation and shape.

Barbari is found all over Iran. Bakeries get started on it in the wee hours of the morning, with rows of Barbari dough balls, being readied to be baked, in time for the morning rush of customers. The dough balls are flattened, glazed, grooved, sprinkled with seeds, stretched, then baked for the hungry hordes every morning.

Each bakery or even baker will have its/his own way of making Barbari, resulting in a slight difference in flavour, texture and perhaps even colour of the crust. The traditional Barbari is very long, measuring about 60-70cm (about 2 feet), with long grooves running right across, with slight bulges at both ends.

Naturally, unless you have a large pizza oven, you’re going to have to cut that length down to fit whatever oven you have, stone or the usual kitchen oven.

I first made barbari, with hilarious results, sometime in the 90s, in the home of my Persian friend, Zareen. Her dad and his brothers ran a bakery just outside of Tehran, that had been in the family for a few generations, before they moved to the UK in the 80s. The bakery is still run by family members, as far as I know.

Zareen’s dad was a whole lot of fun, as was her mum. And it was from them, but mainly the dad, that I learnt to make Barbari and other Persian breads. From her mum, I learnt to cook traditional Persian food.

Mr & Mrs N were also extremely patient, which was a good thing, as it took me quite a few attempts to get the bread baking part! As is in our culture, I always addressed them as uncle and auntie, which to a young, single girl in a big city, with no family of her own around, was just perfect!

There are a few parts to making Barbari, with the usual resting time when making bread.

I have so far found that all purpose flour works best, resulting in a softer Barbari with a lighter crumb. When following a new recipe to make a new bread, this is probably the biggest factor that influences the final result.

Flours vary from country to country and make to make. So start with a flour that has a minimum of 10% protein and see how you go. One of these days, I’m going to try Italian 00 flour and will update here as to what I thought of it.

I would suggest an initial minimum resting time of 1 hour. With the recipe here I like to give it a full 2 hours. I have, on a few occasions, left it overnight, but reducing the amount of yeast by 1/3.

The roomāl is an essential part of baking barbari. Every person has his own preference for this mix, as it enhances the look and flavour of the final bread.

The basic version consists of just water and flour, although some people add bicarbonate of soda to this basic version. I have never been able to find out why. So if you know, let me know! Some bakeries may also add saffron, honey or date for a flavoured crust and a deeper colour.

I suppose you might consider this a skill, as the more you bake Barbari, the better you will get with this. The first time I made barbari, under the watchful eye of Mr N, I erm, messed it all up. I ended up with a thin middle and bulbous ends! Because I was trying too hard.

A properly made and rested barbari dough is so sticky and pliable that the stretching almost comes naturally as you are lifting the bread across. Almost. You do have to encourage it a little with your hands.

My suggestion to you would be to keep practising. Initially, just lift and place on the “transfer board” (see explanation of transfer board below). Then stretch the bread on the board by pulling along the grooves. As you get more comfortable with the lifting, just pull it ever so slightly, while your fingers are supporting the middle.

Making grooves on your Barbari

A pizza peel will make transferring your barbari to the hot pizza stone or baking sheet much easier. A pizza peel is the pizza board you use for inserting and removing pizzas. Technically, any wooden board will work, preferably, with a handle, but it wants to be slim to be able to slide under your bread.

At the time I was taking these photos, we’d just moved – I couldn’t find my pizza peels anywhere! So I had to make do with the best thing I had. You can use a wide spatula to lift the edge of your bread onto your board, if yours is as think as the one in these pictures.

And before I go, here is an old YouTube video that I just love, showing barbari being made in a bakery in Tehran:

If you enjoy the recipe, drop me a comment and let me know. And if you are feeling like a star, don’t forget that 5-star rating! 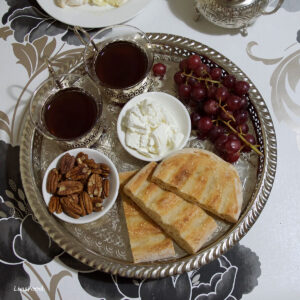