Skip to content
Çoban Salatası aka Turkish Shepherd Salad, is as simple as a side salad can be, with minimal prep time and easy ingredients.
Jump to Recipe Print Recipe

Çoban Salatası aka Turkish Shepherd Salad is a refreshing side salad that has variations all throughout the Middle East, the Mediterranean and India.

Let’s break it down first, shall we?

No one really knows why it’s called so, but Musa Dagdeviren, a renowned Turkish chef, has this theory:

Shepherds probably took a few tomatoes and an onion in their sacks to eat for lunch. They smashed the onion, halved the tomatoes and ate them together for a rudimentary lunch.

This naturally evolved into the piquant Turkish salad that we know today, popular in homes and restaurants alike.

So next time you’re in Turkey and faced with a menu all in Turkish, you’ll at least recognise this salad name! Stick with me, and we’ll do other recipes too, like Hünkar Beğendi and Izmir Kofte, which you’ll find on LinsFood.

There are so many traditional Turkish salads, each bursting with its own signature flavour, but in terms of simplicity, you can’t beat Çoban Salatası. It’s a very, very easy salad to put together, requiring simple ingredients, let’s take a look at them briefly.

Cucumbers and tomatoes form the base of a good Turkish shepherd salad. You can use any cucumbers that you can get your hands on. I don’t subscribe to the notion that you need a particular type of cucumber for specific recipes.

Cucumbers are, in my opinion, cucumbers, whatever their type and origin – Persian cucumbers, English cucumbers, it doesn’t matter.

They want to be diced to bitesize pieces, but to some extent, this is a matter of preference. 1 cm square (just under 1/2 inch)  is probably about as small as I’d suggest, as anything less and your salad might end up being a mush.

Once again, the type of tomatoes doesn’t really matter. You just want to make sure that they are ripe but still firm, as you’ll be chopping them up, and don’t want to end up with tomato sauce!

Çoban Salatası is best enjoyed on warm summer days, when tomatoes are at their best, with their deep orange colour and sweet flesh. Of course, you can make this salad all year round, but my personal preference for making this Turkish salad is when I have fresh tomatoes in the garden. Or if I find some heirloom varieties at markets.

The tomatoes want to be chopped up to the same size as the cucumbers, so one can enjoy a forkful of both ingredients at the same time.

I love using either spring onions (scallions) or red onions when making this Shepherd salad. Both are milder and sweeter than their brown counterpart. But this is completely up to you.

Whichever onion you’re using, you’ll want to chop it up to about the same size as the cucumbers and tomatoes.

Flat leaf parsley makes up the bulk of the “green” flavour lent to Turkish shepherd salad, with mint playing a small part lending, a sharp slant to it.

The herbs will want to be chopped up small so they’ll blend nicely with our vegetables. If you can’t get flat parsley, curly leaf will do too.

While not always present in Çoban Salatası, peppers are still a very popular ingredient. These are the long, green mild sweet peppers, generally described as banana peppers.

A few of these are from Turkey, like Surmeli, Yavlova Carlston and Tatli Kil Sivri (tatli means sweet). They are all loosely classified as Turkish peppers in many ethnic stores around the world.

These long mild chillies are sweeter than bell peppers, and add a wonderful crunch and sweetness to our Turkish salad.

I get mine from our local Korean supermarket as well as the Pakistani grocer, both a 10-minute walk away. You don’t need a Turkish shop to find them! But if you can’t get them, and want sweet peppers in your salad, a green bell pepper will work marvellously too.

Radishes are sometimes added to this salad too, adding a sharp flavour, crunch and colour. I don’t usually use them as what can I say, I’m not a huge fan.

Sometimes, a little cottage cheese is crumbled over Coban Salatasi, but this is not a very common thing to do. So if you want cheese in this Turkish salad, that’s the way to go, not feta.

If you want to make authentic Turkish shepherd salad, stay away from those olives and feta cheese! Add these in and you no longer have a Turkish salad, what you have on your hands is a Greek salad!

This is kept very simple. All you really need is extra virgin olive oil, fresh lemon juice and some salt and pepper.

Some people may add a little sumac, which is what I do in this recipe over at LinsFood, where it first appeared about a decade ago. The sumac makes it lean a little towards Salad Shirazi, which is this Turkish shepherd salad’s Persian cousin from the area of Shiraz in Iran.

Fancy restaurants in Turkey may also add some vinegar, whether that’s red wine vinegar or, in the case of Musa Dagdeviren, some grape vinegar.

You can whisk the dressing ingredients together or just drizzle and sprinkle over individually, it really doesn’t matter. Then toss everything together for a healthy dose of yum! I did say it doesn’t get any simpler than Turkish shepherd salad, didn’t I?

How to Serve Turkish Shepherd Salad

Çoban Salatası is traditionally served as a side dish. It makes a lovely accompaniment to any main dish, of whatever origin, it doesn’t have to be Turkish.

Have some bread at hand to enjoy the salad, to scoop up all that lovely juice at the bottom of your plate or bowl. Whether that’s traditional Turkish flatbread, pita bread or even just baguette, you’ll be glad for it.

Yes, you can but without the dressing on. Chop all the salad ingredients up and place them in a bowl. Cover with cling film and place in the refrigerator.

Then just before serving add the salad dressing and gently toss to mix everything well. Taste it and add more salt if you think it needs it.

However, if you have any leftover, it can be kept in the fridge, covered for up to about 6 hours. For eg, if you made it for lunch, and didn’t finish it all, it’ll be perfectly fine served at dinner. I do that with most of my salads. They tend to taste better, as the flavours have had a chance to mingle, but they won’t be as fresh or crunchy.

And now, shall we get in the kitchen?

If you enjoy the recipe, drop me a comment and let me know. And if you are feeling like a star, don’t forget that 5-star rating! Thank you! 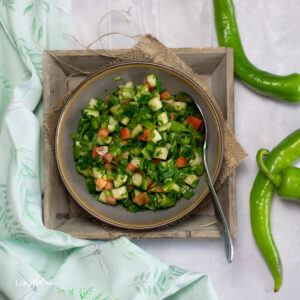