Skip to content
Click here to get my easy homemade ashta recipe for using in Qatayef, Kunafeh, Znoud el Sit and so much more!
Jump to Recipe Print Recipe

Ashta is basically the Middle Eastern clotted cream, and it tastes like mascarpone, only flavoured however you want to.

Ashta is a much loved Middle Eastern cream, resembling clotted cream in texture and is used as both a topping and a filling for countless Middle Eastern desserts.

Unlike its Western counterpart though, ashta is flavoured with either orange blossom water or rose water. I also give you other suggestions on how to flavour your homemade Middle Eastern clotted cream, below, if you can’t get either.

It is also called kashta or kishta and can also be spelt as Eshta. This is because in Arabic, especially Egyptian Arabic, the letter a is pronounced like in apple. I’ve also heard it called Lebanese clotted cream by many eateries in London.

In the Middle East, you find it everywhere, much like we would fresh cream, mascarpone and clotted cream. So if you live there, chances are, you’ve never given it much thought!

For those of us outside the region, don’t fret, ashta is very, very easy to make at home.

How to make Ashta at Home?

Traditional ashta would have been a long, painstaking affair. One would boil some whole milk and keep skimming off the fat (skin) that rises to the top, just like making clotted cream. The collected fat is your eshta.

There are a few different ways to make ashta cream at home. Depending on the method, it may involve curdling milk for the curds (like making ricotta cheese and paneer) and thickening milk and cream.

The thickening agent can also vary. I like using the simple cornflour (cornstarch in the US). But others may use white bread or even all purpose flour.

Making this Middle Eastern clotted cream is a fairly straightforward process. I’m giving you 2 recipes. Well, technically, it’s a single recipe. You have the option of skipping stage one for the Cheat’s Ashta, known colloquially in Arabic as Eshta Kazaba.

This is what we’ll be doing:

Use the liquid you strained (the whey) to make soup or even to replace the water or milk in baking.

What do you think? Easy, right?

Homemade ashta cream using this curd method creates a slightly gritty and lumpy result. If you want a smoother cream, just place it in a blender and process until smooth.

So I promised you a cheat’s version, didn’t I? A super quick and super easy ashta.

To make eshta kazaba, or cheat’s eshta, if you like, skip Step 1 and just do Step 2. So all we are doing is creating a thickened cream mixture with milk, cornflour and cream.

You will end up with a thick and creamy, delicious ashta with this version.

The advantage of doing step 1 as well is added depth and texture. And yes, fat and calories!

What Flavours to use for Ashta?

The traditional flavours used in ashta is either orange flower water or rose water. Both are available in the baking aisle of your supermarket next to the vanilla.

If not, go online, these are my affiliate links to purchase them off Amazon, they are what I use.

You can also think outside the box when flavouring ashta, just like when topping mahalabia, as I suggest here. These are some of my favourite ways when finding alternative flavours for eshta:

What is Ashta Made Of?

How to use Ashta?

If you are making a Middle Eastern dessert that calls for cream or ashta, well, then, this is what you would use. Some recipes that we use it in:

Below are some of my recipes that use ashta. I apologise, but they are all still on LinsFood. Clicking on the links below will take you to a new tab/window.

Kunafeh
Easy Knafeh recipe to make at home using mozzarella and ashta. Also spelt as Kunafeh and Kanafeh, it's a popular Middle Eastern sweet.
Check out this recipe!

Just use an immersion blender and blend it until smooth. Or use a regular smoothie blender.

2. Will ashta thicken as it cools?

Yes, it will, so don’t worry too much if it’s a little on the light side once you’ve made it?

3. How to lighten chilled ashta?

If your cold ashta is too thick to spread on say Kunafeh or Layali Lubnan, just whip it up with an immersion blender. This will also create a smoother cream as we discussed earlier.

4. How long will ashta keep?

Kept in a covered container in the fridge, it will last 3 days. And it has to be kept refrigerated, treat it like you would any fresh dairy product.

Unfortunately, ashta can’t be frozen. Like most creams, the protein and fat molecules will split, giving you a grainy and watery mix. You could blend it back together, but it will start to weep very quickly (release liquid).

And there we have it. How to make your own ashta at home! Look out for our qatayef recipe in a few days!

If you enjoy the recipe, drop me a comment and let me know. And if you are feeling like a star, don’t forget that 5-star rating! Shukran! 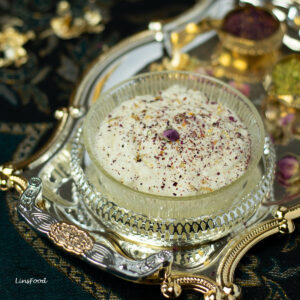 Finishing the Ashta Cream with the Curds (skip for Cheat's Version)

The nutritional value is based on 12 servings.

2 thoughts on “Homemade Ashta Recipe (plus a Cheat’s Version)”