Skip to content
Homemade kashk - so easy and freezes well, perfect for classics like the Persian Kashke Bademjan and the Jordanian Mansaf.
Jump to Recipe Print Recipe

This homemade kashk recipe is going to be your next best friend, allowing you to make countless Persian and other Middle Eastern dishes that call for it.

Kashk in English, to put it in the simplest terms, is fermented yoghurt. It’s creamy, tangy and is rich in umami notes, a little like goat’s cheese. It is a much loved ingredient not just in Iran, but also the surrounding region, across the Middle East, Central Asia and The Balkans.

It is also found as dried fermented discs in many of these places. These discs are ground and mixed with water before being used.

These are some of the names that kashk is also known as:

The production methods and presentations may differ but all the dairy based ones can be used interchangeably in recipes that call for any one of them.

What is Kashk made of?

Kashk is what it’s called in Iran, and in ancient times, many food historians believed it was made using fermented grains. Somewhere along the lines, milk was added to the process and until today, this fermented product can be made with either or a combination of the two.

Fast forward a few hundred years, and the Iranian kashk was made using doogh, a by-product of making yoghurt butter. You can read more about that, and get the recipe for doogh, here on LinsFood.

Homemade kashk or jameed is so much better than anything you can buy in a carton. It has a fresher flavour and is much closer to a traditionally made version.

You can easily make kashk at home with yoghurt, water and a little salt. This is what we’ll be doing:

How long does Homemade Jameed Last?

Homemade jameed or kashk will keep in the fridge for a week, whether stored in its reduced form or after blending with water and salt.

How much water you use to blend homemade jameed depends on your recipe. Some may call for a runny kashk, while others will require a thick dollop, especially when used as a garnish.

You can also freeze it. Again, you can do this before or after blending it with water. My preferred way is to freeze it in its grain form, in ice cube trays, as you can see in the image. That way, I can use as much or as little as I need, without any leftover waste.

What is Kashk Used For?

Kashk is pretty much used in similar ways, no matter what it’s called. We use it:

In some ways, kashk is used as you would use soured cream or crème fraîche in savoury recipes.

Kashk substitute? If you desperately need to have some kashk or jameed and don’t have the time to make it, you can use crème fraîche or soured cream. Grate in a tiny amount of goats cheese or parmesan to up the umami factor.

Look out for recipes over the coming weeks that use kashk or jameed.

And now, shall we get in the kitchen?

If you enjoy the recipe, drop me a comment and let me know. And if you are feeling like a star, don’t forget that 5-star rating! Merci! 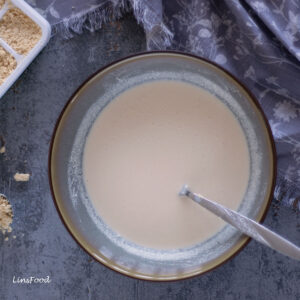